The Valley of Geysers, the tourist gem of the Kamchatka peninsula 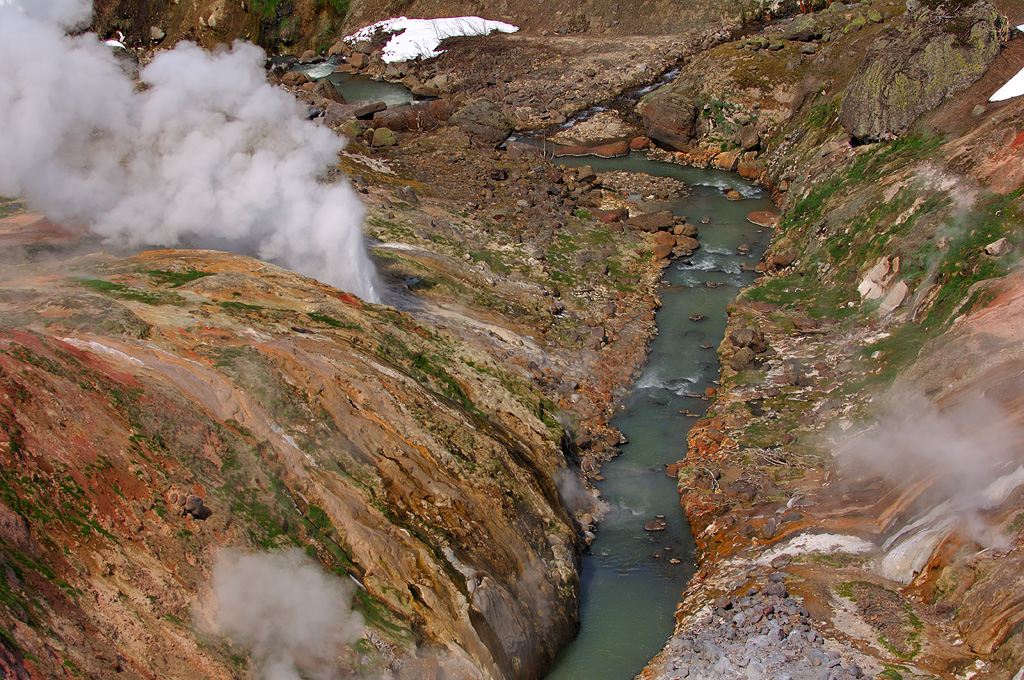 Among the mountains and volcanoes there is a seething valley with thermal springs, geysers and hot rivers.

Kamchatka has the only geyser field in Russia and all of Eurasia. The Valley of Geysers is a deep canyon of the Geysernaya river on the sides of which there are numerous outlets of geysers, hot springs, mud pots, thermal sites, waterfalls and lakes. These reservoirs boil and bubble, enthralling all those present! Located in a hard-to-reach ravine on the territory of the Kronotsky Nature Reserve, the Valley of Geysers was discovered accidentally and relatively recently, about 80 years ago. 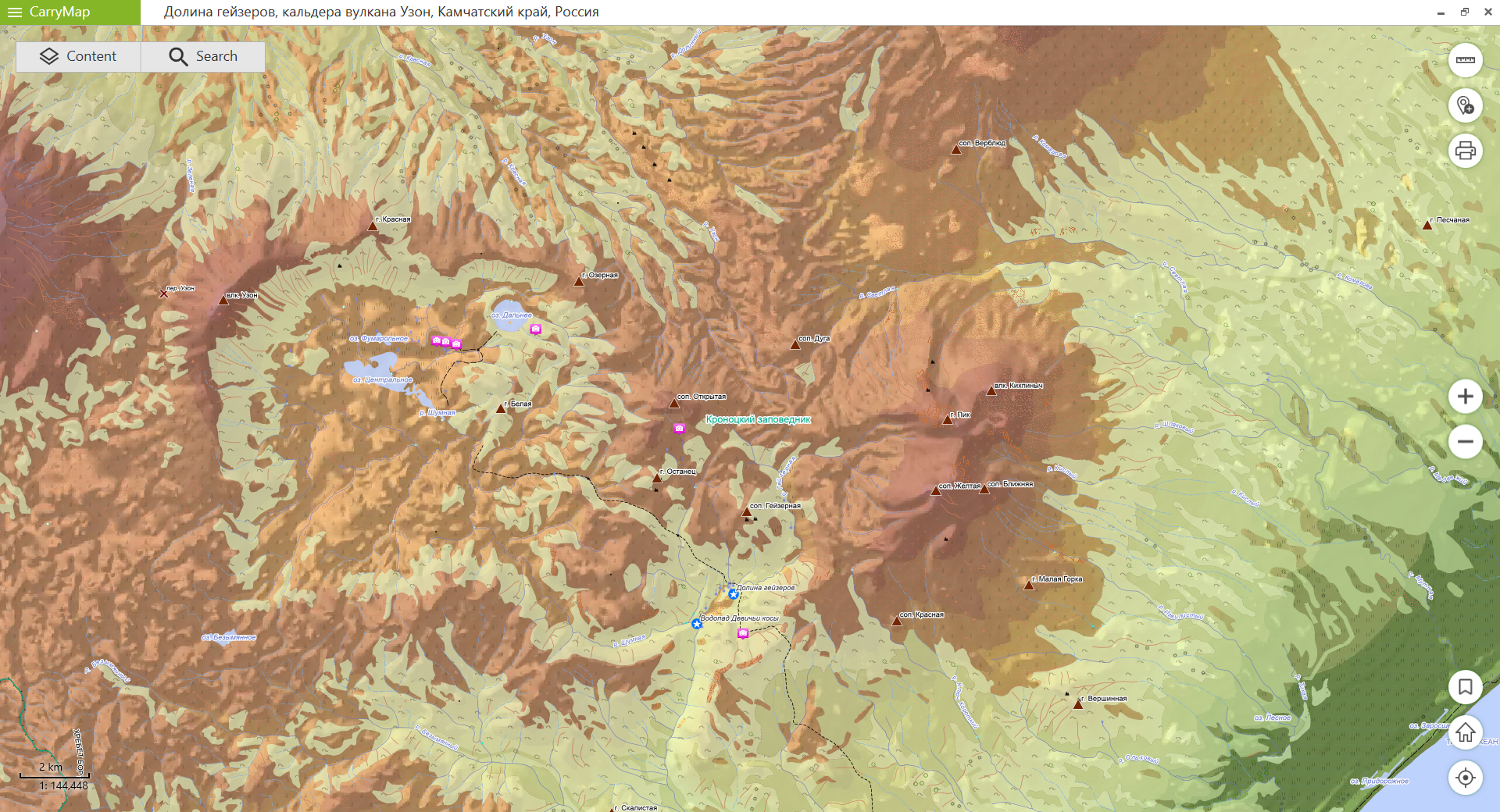 What is a geyser?

A geyser is a rare kind of hot spring that is under pressure and erupts, sending jets of water and steam into the air. Geysers are made from a tube-like hole in the Earth's surface that runs deep into the crust. The tube is filled with water. Near the bottom of the tube is molten rock called magma, which heats the water in the tube.

Water in the lower part of the tube, close to the magma, becomes superhot. Gradually, it begins to boil. Some of the water is forced upward. The boiling water begins to steam, or turn to gas. The steam jets toward the surface. Its powerful jet of steam ejects the column of water above it. The water rushes through the tube and into the air.

The eruption will continue until all the water is forced out of the tube, or until the temperature inside the geyser drops below boiling (100 degrees Celsius, or 212 degrees Fahrenheit, at sea level). After the eruption, water slowly seeps back into the tube. The process begins again. In some small geysers, the eruption process can take just a few minutes. In larger geysers, it can take days. The fascinating spectacle!

More than 40 geysers and many thermal springs are concentrated in the Valley of Geysers, which are conventionally divided into 9 sections. Here there are more than 20 large geysers, some of which gush every 10-12 minutes, others erupt once every 4-5 hours. The Velikan (Giant in Russian) Geyser is the biggest one, during eruptions every minute it throws out more than 30 tons of water to the height of a nine-story building (about 40 m). Several times the Valley of Geysers was exposed to serious dangers that could wipe it off the face of the Earth. In 1981, the Typhoon Elsa hit the valley. In 2007, a landslide came down the slope of Vodopadnaya Hill and almost completely changed the valley’s landscape, burying some of the famous geysers under it. In 2014, a mudflow descended along the bed of the Geysernaya River and changed the Valley of Geysers, including the work of the Velikan Geyser. Fortunately, some of them later still managed to break through to the surface.

Interesting facts about the Valley of Geysers:

From May to the end of June the territory of the Valley of Geysers is closed because of ‘Bears’ weddings’ – the mating season of brown bears.

A special, protected regime operates on the territory of the entire Kronotsky Reserve, so driving or hiking is prohibited. You can only get here as part of an excursion group and only by air. Walking routes along the valley of geysers are lined with wooden decks. This was done for safety reasons, since there are many dangerous and treacherous places in the valley, you can get badly hurt, burn your airways or step into a green meadow, but in fact into a red-hot slurry up to a meter deep. 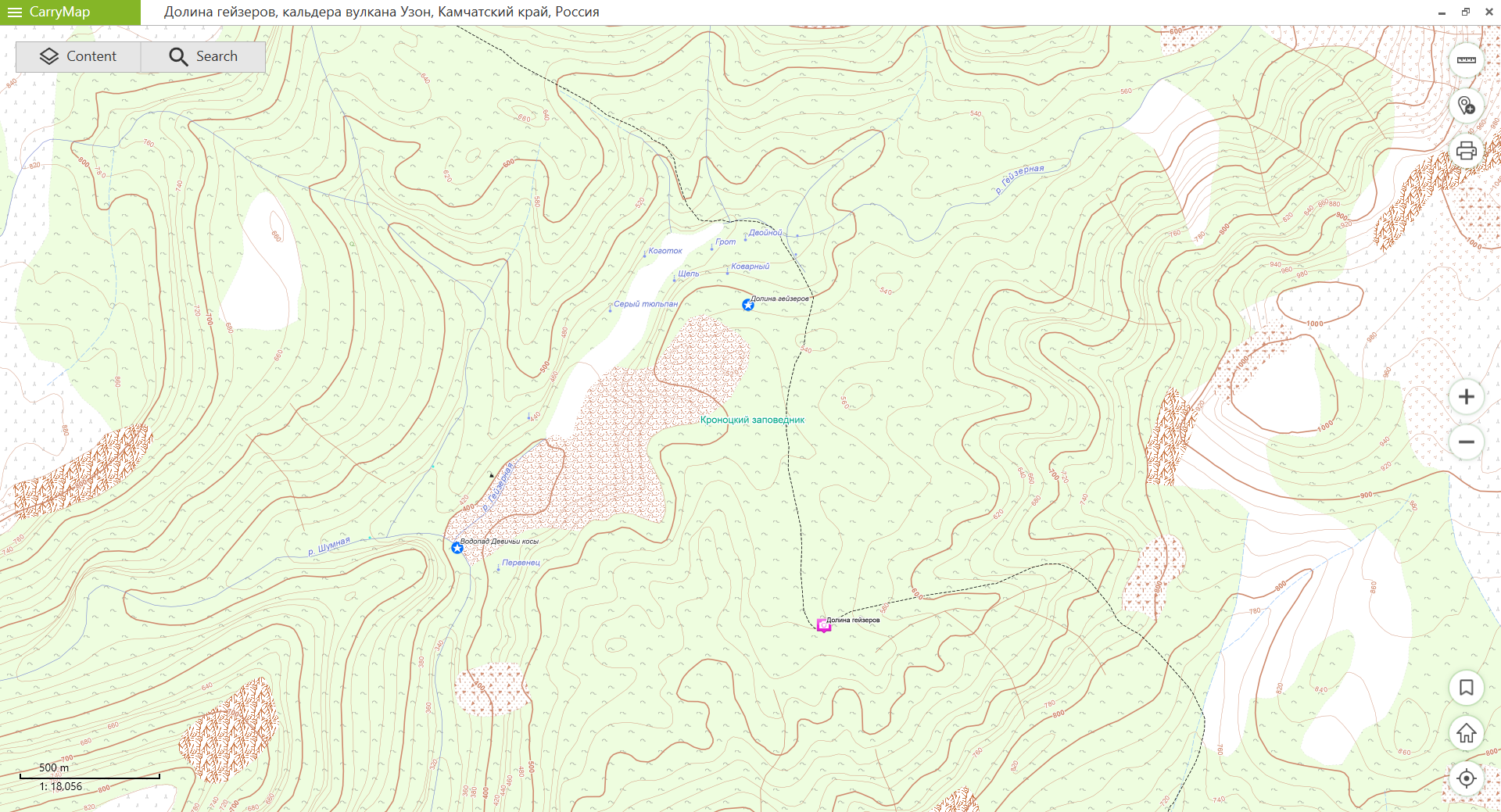 The interactive map of the area will not only tell you how to reach the Valley of Geysers but also show how to find all the beauties of this region. Using this map, you can easily navigate the area even offline.

Physical map of the world